To dot or not to dot? Here is a crucial tip that will help you decide between the different vowels in Finnish.

After you’ve watched the video, practice by completing the exercise below!

Why do we say talossa? Why is the last vowel A and not Ä? The answer is in the Finnish vowel harmony.

Most of the time, if you happen to get the vowel wrong,  it’s not the end of the world and people will understand you. It’s worth practicing, though. Mastering it will make a difference in your pronunciation, and those sounds really are so different that they may change the meaning of the word.

First, we’ll look at how to categorize the vowels:

What does it mean when I say that vowels are back or front vowels? Let’s take A and Ä, for example. When you pronounce the back vowel A, the pronunciation is “happening” in the back of the mouth, whereas when you pronounce Ä, you’re focusing on activating the front of your mouth. That’s how those sounds differ, one is a back vowel and the other a front vowel! Check out the video above to hear me pronouncce those two vowels and compare.

Basically, if you have back vowels (A, O, U) in the word, then you’re not going to see front vowels (Ä, Ö, Y) in the same word. The word talo can only take case endings like -ssa, -sta, -lla, but not -ssä, -stä or -llä, for example. However, the word metsä has an Ä, which is a front vowel, so you can be sure that the ending is going to be -ssä if you want to say “in the forest”, metsässä.

What if the word only has the vowels I and E?

What if you have a word like pieni, then? Well, pieni only has “neutral” vowels, and that means that, most of the time, you can choose a front vowel to go with it: pienessä, pienestä, pienellä…

Yeah, ok, so Finnish does have words that don’t follow the vowel harmony rules. Fairly recent loan words like labyrintti are a little more difficult to pronounce. Luckily, there aren’t many of those! 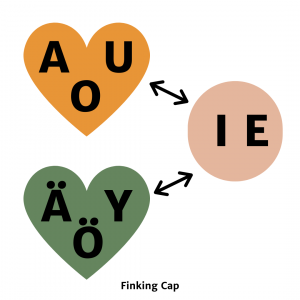 Now, you get to practice!

Want to learn more Finnish online with me?

Join the Finking Cap Club and get access to my growing library of Finnish tutorials, exercises, short texts and much more. Tervetuloa!
Learn more

Check out my Mini Listening Exercises: