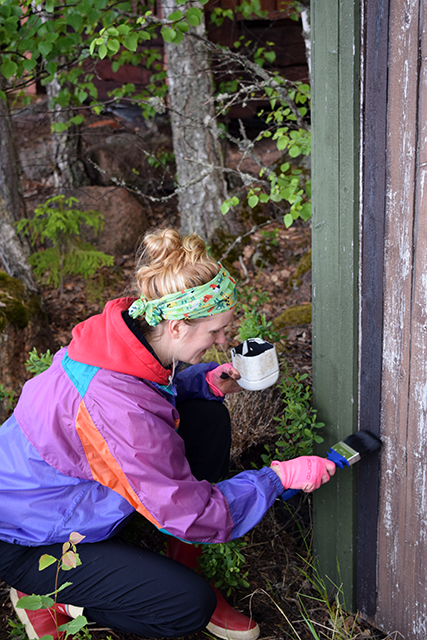 Are you confused about the object cases in Finnish? In this blog post, we’ll go through a few sentences and how using the partitive or the accusative can affect the meaning.

The above photo shows me painting a door at the summer cottage.

The fact that I’m saying oven (the accusative, which actually looks like the genitive and can also be called the genitive) and not ovea (the partitive) means that I’m talking about also finishing painting the whole door.

Here’s how the partitive could change the meaning of the sentence:

Now, if I say Minä maalasin ovea (with the partitive), I’m saying I painted SOME of the door. There is no mention of finishing painting the door! That’s how subtle the difference is. It’s usually not the end of the world if you get it wrong. But just be aware of how the partitive can change your sentence.

The accusative can also look like the nominative – depending on the sentence structure!

Could you tell someone Maalaa ovea ? Yes, you could. But with the partitive, you’d be telling them to paint (some of) the door.

If there is no reason to use the partitive object ovea, then you need to use the accusative. But you can’t use oven. This sentence is a command, which means the accusative will look like the nominative ovi.

If this sentence was Minun täytyy maalata ovea, it would mean “I have to paint (some of) the door”. It’s certainly grammatically correct to use the partitive ovea! But we’re not using the partitive, because we want to talk about painting the whole door, not just some of it.

You could also say Minulla on aikaa maalata ovea. But that would mean “I have time to paint (some of) the door”. We want to talk about painting the whole door. Therefore, we use the accusative. And the sentence structure here requires the nominative ovi again. When you’re using the “Minulla on aikaa + verb” structure, you can’t use oven.

With the partitive, this would be Oli kivaa maalata ovea, and that’s grammatically correct. But again, the meaning would be more like “some of the door”. That’s probably perfectly ok! If, however, we choose not to use the partitive, then we use the accusative, and in this “Olla kivaa + verb” structure we have to use the nominative ovi.

Check out my online membership, the Finking Cap Club, where you’ll get access to a growing library of videos and exercises on Finnish grammar, vocabulary and conversational Finnish. If you have questions, I'll be there to help you in the discussion forum.
Learn more
PrevPreviousSaada, osata, voida worksheet
NextKuulla vai kuunnella?Next
Tagged accusativeakkusatiiviobjectPhrases